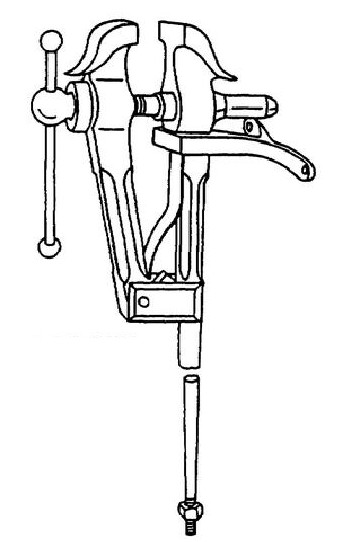 A blacksmith is a craftsman who forges metal to create various items and tools. The blacksmith uses a variety of tools when making items from wrought iron and steel, include the anvil, the tongs, the hammer, rivets and the vise among other tools.The design of the blacksmith vise, one of the most important tools in the blacksmithing trade, was most- likely invented in the seventeenth century, and has continued to be more or less the same design up to the 20th century.

The body of the blacksmith vise is made from mild steel or wrought iron. Hard steel surfaces are welded into the jaws of the vise, and the jaws have very shallow serrations that typically wear-off over time.The blacksmith’s leg vise, also referred to as the ‘solid box vise’; grips hot iron firmly while it is being twisted, hammered or chiseled.

A 30-pound vise that is relatively small can survive and take a massive pounding that could damage a cast iron bench vise that is much heavier. The leg vise design makes it suitable for taking in this type of blow on a daily basis much better than other vises.Some of the aspects that make the blacksmith’s vise very unique include;

All these attributes of the blacksmith vise make it a tool that can withstand long periods of abuse, and many of them have been in use for over one hundred years.The leg vise is named so particularly because of the characteristic ‘leg’ that extends down from the vise’s rear jaw to the floor. It is the tool of choice for the blacksmith since the leg that extends below the vise provides that extra rigidity and stability that is required especially when the work is being continually pounded by the blacksmith.

The blacksmith’s leg vise can be mounted either on a steel bench or work bench, a tree stump or even a post. The mounting is done with a wooden shim placed between the steel table and the mounting plate that is on the vise. A leg vise should never be mounted on to a steel or concrete bench or without using a thick wooden shim. The wooden shim used between the bench and the vise or the use of mounting bolts will prevent the vise from being pulled out because of the constant concussions. It will also reduce the rate and effect of wearing out.

At the rear part of the blacksmith vise, there is a mounting bracket that may be vertically adjusted to approximately 2 to 3 inches. This will enable the vise to properly fit the height of the stump or of the bench.