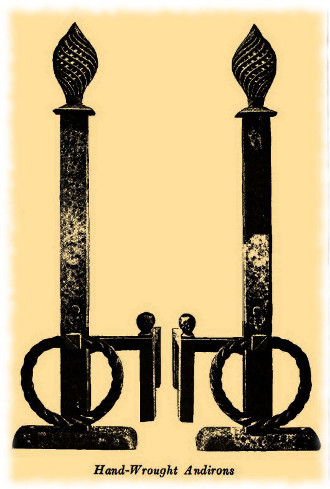 People have an innate love of beauty and the handcrafted. Primitive man first fabricated tools purely for utilitarian purposes, however, as he used them for daily tasks, he began to find them distasteful in appearance; and the spirit of decoration took possession of him and began altering how he made them, by incorporating different design elements.This is evident in the earliest examples of pottery and  weapons. Through evolution, decoration has been observed as a manifested trait of mankind.

Wrought iron makes the strongest gates, locks and hinges, and these were fashioned into many beautiful designs. Later, as he refined his skills, hand forged wrought iron was used to fabricate many other useful and necessary items. Many of the finest types of ornamental ironwork were found to have been created in the twelfth to seventeenth centuries.

Wrought iron has grown in popularity, to represents strength, prestige and a departure from the cheaply made, mass-produced store-bought items. Wrought iron makes an excellent choice for home decor, as well as for architectural purposes and artistic pieces.

The intended use for wrought iron should dictate the manner in which it is designed, especially when considering examples such as fireplace items, hardware, and outdoor devices such as gates and railings. Attention to strength and function is the priority and should be kept in mind when addressing the purpose for how a particular piece is meant to be used. This is paramount, before the addition of any sort of decorative elements; which then need only to be used to suggest the piece's durability and intended use.

When creating hand forged wrought iron, the blacksmith should be intimately acquainted with his or her material. They must know how much working the metal will endure under certain conditions; how much can be worked hot and what part may be worked cold. They should be able to put their ideas on paper and picture the lay out in their mind. In no other way can one be successful in this craft. The true craftsman must study the ironwork of the past as well as modern examples in order to get a correct idea of what is considered good.

Designing hand forged ornamental wrought iron requires careful consideration to the appropriateness of the design as it applies to it's function. In designing a set of andirons for a fireplace, for example, the first thing to consider is the style and size of the fireplace.Andirons are a utilitarian device, and as such should be strong enough to resist the tendencies of bending or warping, due to the heat of the fire. The ornamental features expressed in them should be a part of the necessities of their construction, rendered ornamental by simply twisting the bars into various shapes, or their treatment may depend on beauty of line and curve.

Every material has a character of it's own, and the decoration best suited to it is the one that fully shows its character. Ornamental wrought iron designs should show the resistant quality of that metal and whatever decoration is applied, should not interfere with it's intended use. The design should grow out of structural necessities. The form should first be considered, then the decoration planned. Mere application of ornament to a wrought iron piece is not decoration. It must be adapted or fitted as perfectly as possible, and by recognition of these demands it can be made harmonious. In making designs for ironwork which consist of curves and scroll work, there must be contrast and variety. These may be obtained by having a constant change in the curvature and direction of lines.

If the wrought iron design is for a grille, for example, its shape must be taken into consideration. If the grille is oblong, the design may repeat itself on each side of a center line. The leading lines of the
design may then start from this center, and their direction should emphasize the lines of its boundary. These lines are the first to be planned and placed into position; next the secondary lines are
planned. These should also be influenced in their direction by the main lines.

Another point to take into consideration is the distribution of lines, that there may be a regulated balance between the lines and masses into which they divide.

A little study of linear ornament and such geometrical figures as the circle, oval and spiral will be of assistance to the blacksmith in designing this class of scrollwork. The circle in itself has not
the interest that the oval or the spiral has, owing to its curve being the same through its entire length, while the oval and spiral have a constant change of curve and direction in their lines, giving them
a variety which the circle does not afford. The spiral is an important element in the designing of ironwork. It may be closely coiled in order to give it the appearance of strength and resistance,
or the coil may be loose, to suggest lightness and grace.

These geometrical forms will yield curves of great decorative value to the designer of ironwork.
By using portions of their curves and combining them with one another and with straight lines, the result will be a variety of lines which may be used in the formation of rich patterns.