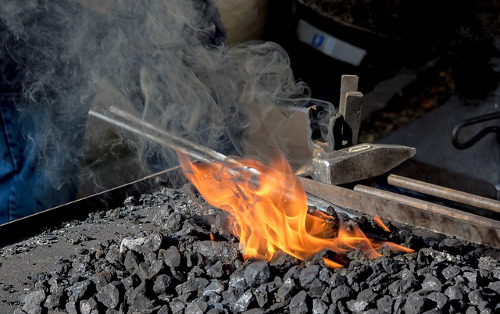 The art of blacksmithing begins with the fire.

An old foreman in the blacksmith department of a factory told me once in a conversation we had about the fire, that he had come to the conclusion that very few blacksmiths have learned how to make a good fire. It takes years of study and practice before the eye is able to discern a good fire from a bad one. A good fire must be a clear fire, the flame must be concentrated and of a white color. Even the nose must serve to decide a bad fire from a good one. A strong sulphur smell indicates a poor fire for welding. "In order to get a good fire there must be, first, good coal; second, plenty of it. It is no use to pile a lot of coal on an old fire, full of cinders and slag. The fire-pot must be clean.

Many blacksmiths are too saving about the coal. They take a shovel of coal, drop it on the forge in the vicinity of the fire and sprinkle a handful of it in the fire once in a while. In such a case it is impossible to do good work and turn it out quick. Have a scoop shovel and put on one or two shovels at a time, the coal should be wet. Then pack it in the fire as hard together as you can. Sprinkle the fire with water when it begins to spread. In this way you get a hard fire. The flames are concentrated and give great heat. Saving coal is just like saving feed to a horse, or grub to your apprentice. Neither will give you a good day's work unless he has all he wants to eat.

The fire, of course, should be in proportion to the work, but in every case the fire should be large enough to raise it up from the tuyere iron as much as possible. In a small fire the blast strikes
directly on the iron and it begins to scale off; in a good fire these scales melt and make it sticky, while in a low and poor fire the scales blacken and fall off. This never happens if the fire is full of good coal and high up from the tuyere iron. A Good strong blast is also necessary for heavy work.

There is an old whim about the fire that everybody,farmers and others, as well as blacksmiths, are infected with, and that is, if a piece of brass is put in the fire it renders the fire useless to weld with. Now, while it is a fact that brass is not conducive to welding it takes a good deal of it before the fire is made useless. One blacksmith will not dare to heat a galvanized pipe in his fire, for fear it will spoil it, while another blacksmith will weld a piece of iron or steel to such a pipe without difficulty. Don't swear and curse if the fire is not what you expect it to be, but simply make it right.

Some blacksmiths have the habit of continually poking in the fire, if they weld a piece of iron they never give it rest enough to get hot, but turn it over from one side to another and try to fish up all the cinders and dust to be found in the fire. This is a bad habit. Yellow colored fire is a sign of sulphur in the fire and makes a poor fire for welding. Dead coal makes a poor fire.

One of the chief reasons for a poor fire is a poor blast.

Order $75 or more to qualify for FREE Shipping in the U.S. on eligible items.