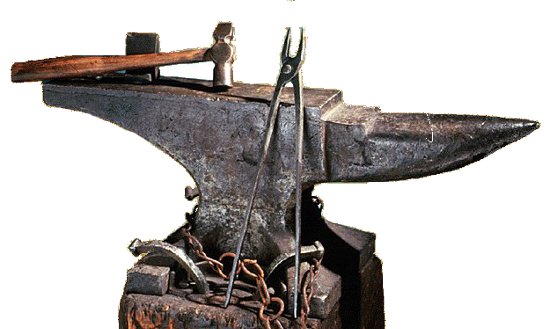 When first starting out as a blacksmith, there are some basic principles that once mastered will be an invaluable foundation on which to build the skills needed to excel in the blacksmithing craft.Correct placement of wrought iron blacksmithing tools and equipment as well as a decent understanding of how to use them; are needed to get started.

Many blacksmith shops lack order, and often the forge and the anvil are crowded too closely together; making it almost impossible to be able to access the wrought iron piece being worked on. It is often necessary to get into positions in-between the anvil and forge; for approaching the wrought iron at certain angles, to be able to strike the piece in the correct direction to achieve success. In many cases the anvil is placed too high creating a situation resulting in less striking power. The correct distance between the center of the forge and the anvil should be from six to seven feet. The anvil should be just high enough to touch the knuckles of the hand when it is closed, giving you the right height for working; and the anvil block should be the same size as the base of the anvil,It can be cumbersome and awkward, as well as ineffective; to try to achieve desired results, without having the anvil and tools within easy reach of each other.

Correct positioning of the body should be achieved even before the first strike of the hammer, since it aids in performance, as well as in the ability to perform graceful and refined movements; that help to extend the duration with which they can be sustained. Freedom of movement is essential, and how close in proximity that the arms are to the body, can effect the way in which tools are used as well as mobility when reaching for them. Stance is important as well, and having the feet placed apart with the toes facing out rather than inward, gives one a better chance of being able to move around more easily.

Adequate space, light, and ventilation, as well as eye and clothing protection; which need to be considered as well. These are major safety concerns; and all are essential for producing good quality work.

Wrought iron tools should be kept in good condition and located in the same place for repeated easy retrieval.