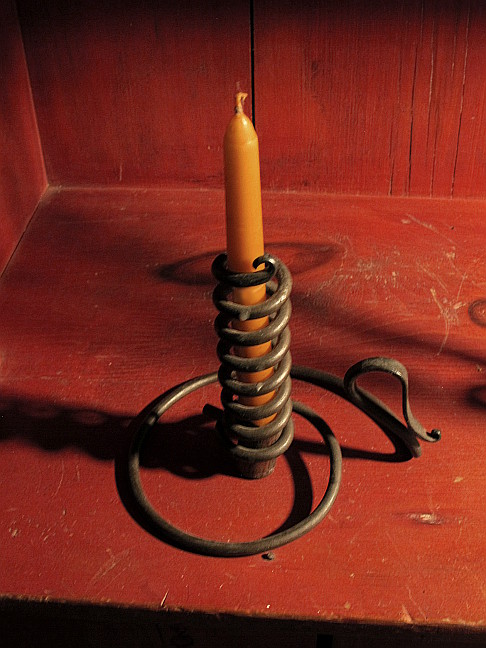 The Colonial Courting Candle, a candleholder usually fabricated of wrought iron; was popular in the 18th-century; and used to mark the length of time a suitor could visit at the home of a girl of wedded age.

Early American legend speaks of a spiral-shaped candleholder, forged of wrought iron that was used to determine how long a suitor was allowed to visit. A young woman's father would set the candle to a particular height, by rotating the wooden piece or "slide". The slide has a protruding peg which twists and moves the candle up and down using the spaces between the coils of the spiral. When the candle had burned down to the level of the top of the candleholder, it meant that the suitor's time was done; and it was time for him to leave. If a certain suitor was not a favorable candidate for his daughter...the candle could be adjusted by the father to a lower height in the candleholder, meaning it would burn more quickly. A suitor who was considered acceptable, would have the candle located in a position that was higher within the wrought iron spirals of the candleholder.

According to historians, the term "courting candle" is most likely an example of folklore rather than historical fact. This type of candleholder may well have been employed as a way for a father to 'screen' potential suitors for his daughters, however; it's purpose was not intentionally developed for that reason.

The spiral-shaped candleholder was actually invented in Germany, before being introduced to the American Colonies of the United States. It was brought to this country by early Pennsylvania-German settlers. The spiral shape was initially chosen for its practicality, and later was considered desirable as a form.

Contrary to what many people today are under the impression of, that candles were the preferred type of lighting used during the Colonial period, candles were actually more expensive than fat lamps, which were which were small dishes filled with fat or oil; containing a wick in the center. They required the necessary skills for fabrication, and also were quite a bit more labor-intensive; as well as time-consuming to create than fat lamps.