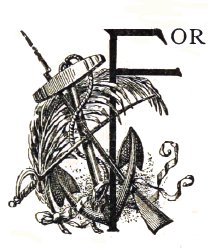 Non-religious people swore by the devil, religious ones by the saints, but the Swedes (considered to be the makers of the best iron products of the time) preferred to swear by the smith. The smith was a well-liked person in society, respected and even admired for his skill, his gentlemanly behavior and good language. His stories and wit, were the sole entertainment in many a social gathering. Things have changed in the last few centuries. Most of the articles formerly made by the smith are now manufactured by machinery, and the respect for the smith has diminished in the same proportion. Not because there is not enough of the trade left to command respect there is yet more left than any man can successfully learn in a short life time. But it has made it possible for men with less training and ability to enter the trade and consequently lower the standing' of the smith. The result is, that there is a complaint that the smith is not esteemed as he was formerly.

Intemperancene of the chief reasons why the blacksmith was not so successful nor respected was due to intemperance. The danger for the smith becoming a drunkard was greater than for any other trade of the day. It was often the case that when a customer paid a bill, that the blacksmith was requested to treat. This was a bad habit and quite a tax on the blacksmith. Fifteen cents a day spent for liquor, would; in twenty-five years, back in that day, have amounted to $9,000. Adding to this, fifteen cents a day for the expense of cigars; which he was also expected to treat for, in twenty-five years, have amounted to $9,000 at ten percent compound interest. If the money for these two items would have been saved, instead; it would have given a man a farm worth $18,000 in twenty-five years. Unfortunately, not enough blacksmiths thought of that and ruined themselves physically and financially. Instead they attracted undesirable customers, their sober customers knew of his reputation, and preferred to patronize a sober smith.

Incompetancy, another reason the blacksmith of yesteryear was not respected, was because of his incompetency. Many young men had worked a few months in a shop, (the amount of time it took to learn to be able to weld a toe caulk on a horseshoe that sometimes would have succeeded in staying on the horse's hoof), and they often began to think they 'knew it all'. There would always be someone ready to flatter him, and the young men believed that they now were competent to start on their own 'hook'. The result is, they would prematurely hang out their shingle, and begin to practice horseshoeing and general blacksmithing, not knowing enough about either. Horseshoeing was a trade by itself, as was blacksmithing. During that time in the large cities there were blacksmiths who knew nothing about horseshoeing, as well as horseshoers who knew nothing about blacksmithing, except how to weld on toe caulks, and in many instances even that was very poorly done.In small places it was different. There the blacksmith was both blacksmith and horseshoer.

Sometimes you could find a blacksmith that was a good horseshoer, but you would never find a horseshoer that was a good blacksmith. This was not generally understood. To many, blacksmithing seems to mean only horseshoeing, and trade journals of the time were not much better at differentiating the two. Whenever a blacksmith was alluded to, or pictured you would always find a horseshoe in connection with it. Yet there were thousands of blacksmiths that never made a horseshoe in their entire lives. Horseshoeing had developed into being quite a trade, and if a man could learn it in a few years he would have done well. It was not advisable for any young man to start out for himself with less than three or four years' experience. Every horseshoer should have made an effort to learn blacksmithing, since he would have been expected to know it, because people didn't distinguish between the two. In smaller cities, it was hard to succeed with horseshoeing alone. On the other hand, every blacksmith should also have learned the art of horseshoeing for much the same reasons. Seven, or even ten years; was actually a short time in which to learn the trade. Those of whom had the patience and who persevered for that length of time, had a better chance of succeeding as a blacksmith or a horseshoer; in a time when everybody wanted to be considered the best without putting in the time it really took to become an expert .

It was, and still is good practice to remember that the reputation that a man got in the beginning would stick to them. Therefore, it was important to be careful not to start before they knew their trade, and the years spent in learning it will not be lost, but a foundation for success. It was also important to remember, that anything that was not worth being well done was not worth being done at all. It was much better to be a first-class chimney sweep or 'bootblack', (commonly known back then as a shoe polisher); than be a lesser-class of anything else. It was advisable to not be satisfied by simply being able to do the work so as just to pass, but instead; for it to be first class. Thousands of so-called workmen were turning out work just as others were doing it, but they should not have been satisfied to do the work like the others were doing it, but to only be doing it of the best and highest-quality.