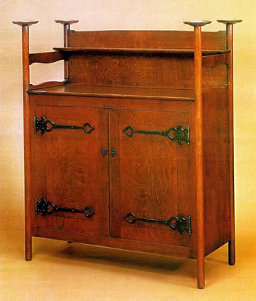 One of the most influential periods in American, European, & Canadian history; in the rendering of wrought iron furniture, wrought iron art, wrought iron architecture & wrought iron decorative accessories, of the late 19th century; came to be known as the 'Arts and Crafts' period. It began in Europe as a movement, which started with the rejection of the then current styles, including Victorian & 'gingerbread'; which were considered to be unnecessarily ornate & fussy.

It was felt by many wrought iron craftsman of this period, that virtuous wrought iron craftsmanship had been destroyed by industrialization, and especially in the case of Victorian...which they felt was industrial & cold in feeling, with no real sense of purpose. This was especially notable in opinions expressed by the artists and craftsmen, such as John Ruskin, William Morris and Charles Rennie Mackintosh; who were involved in the design & creation of homes, furnishings & art decor. They decided that the way in which things should be crafted, needed to be related to the quality and way they functioned; rather than to the frivolous manner in which they were being designed at the time. They also felt that there was a need to return to a more simplistic, less fabricated, more 'down-to-earth' style...which emphasized reconnecting with nature and it's elements. They executed new designs that featured plants, animals, and structures, which reflected simple, realistic, as well as natural & organic objects found in the outdoors. Many of these new styles encompassed their philosophy, and was seen in the themes of everything from furniture to useful or decorative objects ...for example, William Morris' book covers included designs & fonts that reflected the content within the book's borders. In contrast to the European philosophy, which was determined to only have work done by existing artisans & craftsman;

The American Arts and Crafts Movement was focused on standing up against industrialization, by making an effort to improve the employment situations of immigrants; both of urban and the rural areas; whose economic circumstances were less than optimum. They strived to help provide alternatives to factory work, as well as also giving them a chance to learn a craft or explore their artistic potential. Many were given the opportunity to receive instruction in many areas of art, furniture, and home building & architecture; and others participated in apprenticeships, working with skilled artisans involved in the fabrication of practical objects designed with this newly-discovered style.These beliefs were echoed in the Movement's philosophy, which was geared towards achieving "democratic design"; meaning simple, quality objects made for the greater population, vs. the privileged. Since the United States middle-class dominated the country demographically, the belief of the movement's members' was that conditions were optimal for people to learn to take on a "do-it-yourself" way of thinking...a major tenet & influential aspect of the movement.

By creating more skilled people who possessed imaginative and innovative ideas; the country would flourish & grow, both economically and culturally; as well as with a higher standard of products being 'manufactured'.