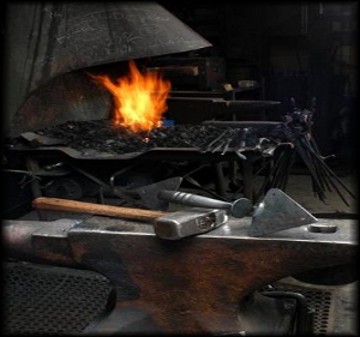 One of the most confusing terms in the ornamental iron business is the phrase "wrought iron."Wrought iron is so named because it is worked from a bloom of porous iron mixed with slag and other impurities. The word "wrought" is an archaic past tense form of the verb "to work," and so "wrought iron" literally means "worked iron".Wrought iron is a general term for the commodity, but is also used more specifically for finished iron goods, as manufactured by a blacksmith or other smith. It was used in this narrower sense in British Customs records, such manufactured iron being subject to a higher rate of duty than what might be called "unwrought" iron.In the 17th, 18th and 19th centuries, wrought iron went by a wide variety of terms according to its form, origin, or quality.

Blend iron is made using a mixture of different types of pig iron.

Best iron is iron that had gone through several stages of piling and rolling, might reach the stage of being best iron (in the 19th century).

This is iron made by members of the Marked Bar Association and marked with the maker's brand mark as a sign of its quality.Dr. Gerry McDonnell in 2010 England, demonstrated by analysis that a wrought iron bloom, from a traditional smelt, could be worked into 99.7% pure iron with no evidence of carbon. It was found that the stringers common to other wrought irons were not present thus making it very malleable for the blacksmith to work hot and cold.

One reason behind the confusion about the term wrought iron is that somewhere between the time that manywrought iron furniture pieces were made and today, real wrought iron went out of production in the U.S.The last plant ceased operations in 1969.The reason wrought iron was phased out is simple, the process is very labor intensive andcostly. In the old days, a laborer had to hold the metal with tongs and "work" it under a steamhammer. In addition, recycling of scrap iron added downward pressure on the price of steel.According to one estimate, production wrought iron costs nearly twice as much as steel.

Currently, the only way to get true wrought iron is to recycle scrap wrought iron or import it from Europe.The scarcity of the metal is unfortunate for the ornamental iron industry because wrought iron is an ideal metal to work with. The metal is corrosion resistant, handles stress well, and can accept a thicker finish.Rather than having the "snap-off" characteristic of modern steels, true wrought is like bread dough orcandy taffy.The reason behind the metal's unusual properties is the addition of iron silicate. This glasslike slag isinterwoven in the iron and gives the metal its "dough-like" form. In a single square inch there may be 250,000 or more of these little slag fibers. By their very nature, the fibers help the metal do a better job of absorbing stress.The slag in wrought iron also provides natural corrosion resistance. Let's face it, nearly all ferrous metals rust, but wrought iron does a better job at handling it. As corrosion progresses, the fibers tend to disperse the rust into an even film, which gives the metal a natural brownish appearance. This film repels the scattering spotty corrosive attack that other metals endure.

Because of its corrosion resistance, wrought was the metal of choice in earlier years for marine use,bridges, and girders. In fact, in extremely corrosive areas, an architect may still specify the metal.Blacksmiths, who regularly work with real wrought iron, know that wrought iron's low carbon content makes it easy to weld.

Wrought iron can stand tremendous amounts of heat and is more forgiving.It is better structurally for old time blacksmithing. Another advantage of wrought iron is that it's rough and irregular surface can hold a finish better. Wrought iron can carry a zinc galvanizing coating that is 25 percent to 40 percent thicker than what would be accepted by a smoother metal.It is no small wonder the word "wrought iron" is still used, even though the actual metal itself is a hard-to-find item.

For at least 5,000 years, blacksmiths have used wrought iron to make functional items and works of art. Some of the world's most famous metalwork is made of wrought iron.